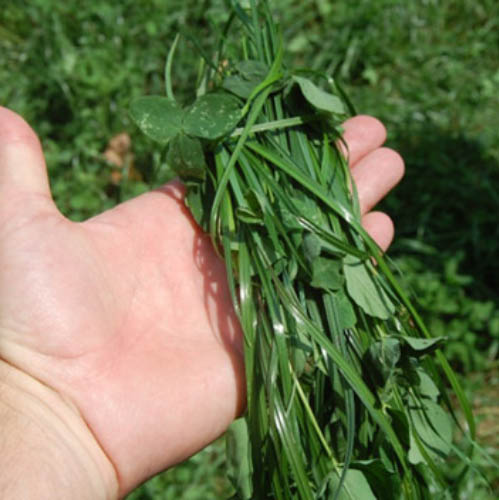 Albion tetraploid perennial ryegrass is changing the way we think about forages in hot, humid, drought stressed climates.  Perennial ryegrass is known for its highly nutritional qualities and also for its susceptibility and poor performance under drought stress, limiting its use to cooler more moderate climates.  Now there is an exception to the rule, Albion tetraploid perennial ryegrass  –  thriving in the traditional ‘tall fescue only’ regions –  completely reshaping the adaptability maps.
These photos were taken August 20 at a field day held on Jeremy Sweeten’s farm this summer.  ‘The fields had been under drought stress at the time, about the only place in Indiana under drought stress this summer‘, according to Steve Houghton.  ‘It [Albion] was lush and growing–the Italians were stunted, chlorotic, and not producing’.
Sweeten had been observing the resilience of Albion particularly as other fields were fading.  Reluctant to take a full cutting from his best field and risk adding additional stress, he took a partial from one side to ensure he would have forage left in the field for a later time.  He was more than pleasantly surprised with the regrowth from the portion he cut and now wishes he’d harvested the entire field.